MCA WANGSA MAJU MAY BOYCOTT CAMPAIGN IF SEAT GIVEN TO UMNO

BN’s desire to take back the Wangsa Maju parliamentary seat seems far-fetched as two coalition parties there – MCA and Umno – are at loggerheads and incumbent Independent MP Wee Choo Keong is in a fixed. Words of MCA and UMNO divisions there do not see eye-to-eye have been around since early last year when rumours had it that the seat would be given to Umno although it was a traditional MCA seat. In fact, MCA would not campaign for Umno candidate as the party view the seat as ‘gone’ given the Malay votes split and the Chinese votes solid against Umno candidate. A township of 65,078 voters with 53 percent Malays, 38 percent Chinese and nine percent Indians, MCA has held the seat until 2008 when Wee, under PKR flag, won the seat with just a 150 votes majority. It is understood that Umno is given the seat and the candidate that is fielded whose banner and operations rooms set up with his photo ‘loud and clear’ is Prime Minister’s political secretary Datuk Dr Shafie Abdullah. MCA Wangsa Maju division secretary Lim Choon Hong had stated that the party would not recognize any candidates other than its division chief Yew Teong Look. The ‘bad blood’ between the two parties began early last year when Shafie began meeting voters without inviting MCA local leaders and Chinese representations. MCA then complaint against the move but BN leadership had decided that the seat be given to Umno despite the MCA contested in the seat in 2004 and 2008. Despite the complaint, Shafie continues conducting activities such as giving out the BR1M to voters and aid to schools in the absence of MCA representatives. MCA alleged that Shafie is not even popular with the Malay voters there let alone being recognized although he is the Umno Wangsa Maju division head. Watching the development closely is incumbent Wee who is still contemplating whether to contest or allow a straight fight between BN and PKR from Pakatan Rakyat. Close friends of Wee said he had wanted to allow BN to contest as he is now a BN-friendly candidate but “the situation now, knowing that giving the seat to Umno would be sure waste, he might reconsider his earlier decision.” “He may make it a three-corner fight,” said his friend. 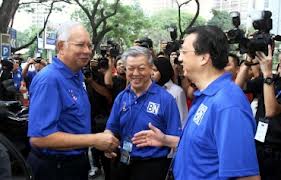